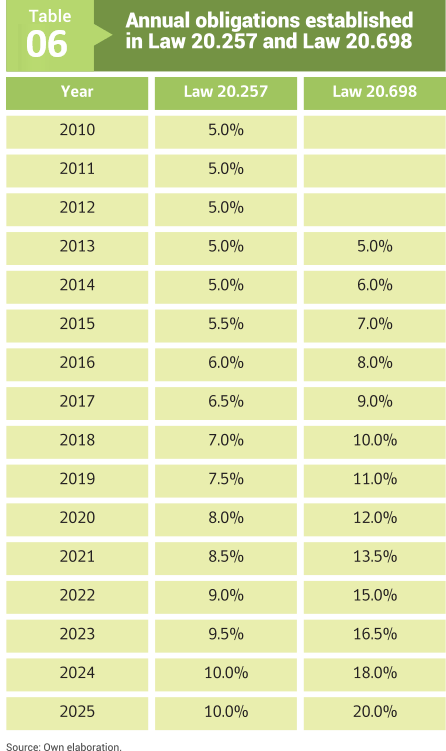 Other important provisions of these laws are presented below:

4.5.1. Compliance with the NCRE obligation

Non-conventional renewable generation has far exceeded the quota imposed by the regulation, as shown in Figure 26. For example, the NCRE quota for 2020 is 8% for the supply contracts entered into between August 31st 2007 and July 1, 2013 and 12% for contracts signed after July 1, 2013. In December 2020, these obligations resulted in a goal of 5377 GWh of NCRE energy. However, the actual and recognized NCRE injection by law was much higher, reaching 14634 GWh, that is, 272% over what was demanded [28]. This surplus in relation to the NCRE obligation has resulted in a price collapse of the NCRE attribute, which is no longer a significant source of project financing. Figure 26 presents the annual obligations NCRE and as these have been systematically surpassed in each year.

Source: Own elaboration from Statistical Yearbook of Energy. CNE