4.4. The regulatory framework for NCRE

The regulatory framework of the Chilean electric system originally made no regulatory distinction for non-conventional renewable energies. The main milestones linked to NCRE are outlined in Figure 22 and in Annex 2.

However, changes to the LGSE, introduced in March, 2004 through Law 19.940, modified a number of aspects of the electricity generation market that affects all generators, introducing elements specifically applicable to NCRE. The spot market is opened and the right to connection to the distribution networks is ensured for small power plants. Many NCRE projects are normally of this size, thus increasing the commercial options for selling energy and power of such power plants.

Additionally, a charge payment exemption for the main transmission system 12 is established for MGNCs (with a differentiated treatment for units less than 9 MW and those between 9 MW and 20 MW). For units from 9 to 20 MW capacity, the charge exemption is calculated as a proportional adjustment ranging from 100% for 9 MW and zero for 20 MW or more. Figure 23 shows the application of this scheme. The foregoing, besides being a benefit for these generation sources, is a recognition of their positive externality due to the low impact that they will have on transmission systems and on the investments associated with their expansion.

It is important to note that according to the legal modifications made by the Law of 20.936 of 2016, as of January 1, 2019, injections (associated with contracts after the entry into force of the Law) were exempted from the payment of transmission charges. On the other hand, injections associated with contracts concluded prior to the entry into force of this law, will be applied a payment system similar to the old one. Section 6.3 of the book explains in greater detail the payment of charges from generators under these conditions.

4.4.1. Price systems in the electricity sector

As discussed in Sections 3.3 and 3.4, a NCRE project in the wholesale market can access the spot and contract markets as the case may be. It is important to note that spot market transactions and contracts are financial and not physical. This means that the physical dispatch of the units is guided primarily by minimizing the operating costs of the system for a given security level and not by the supply contracts established between the parties. However, in order to give greater clarity on the dispatch of units and valuation of transfers, a brief description of the dispatch of the units is given and the general commercial balance of NCRE generators is presented later.

For a given time, the pool establishes an economical system operation, which results in marginal costs on the injection and withdrawal bars of the system. In its simplest version, the economic operation of the system is achieved by dispatching the generation units in increasing order of variable generation costs, until they can cover the required demand at a given time. In this way, the null or low variable cost units are dispatched first. This type of generation, common among renewable energies (run-of-river, solar, wind, etc.), is called base generation units. Figure 24 shows the relationship between increasing variable costs of generation by technology and the aggregate demand of the system. At higher demand, the variable cost of system generation rises as more expensive technologies are required. 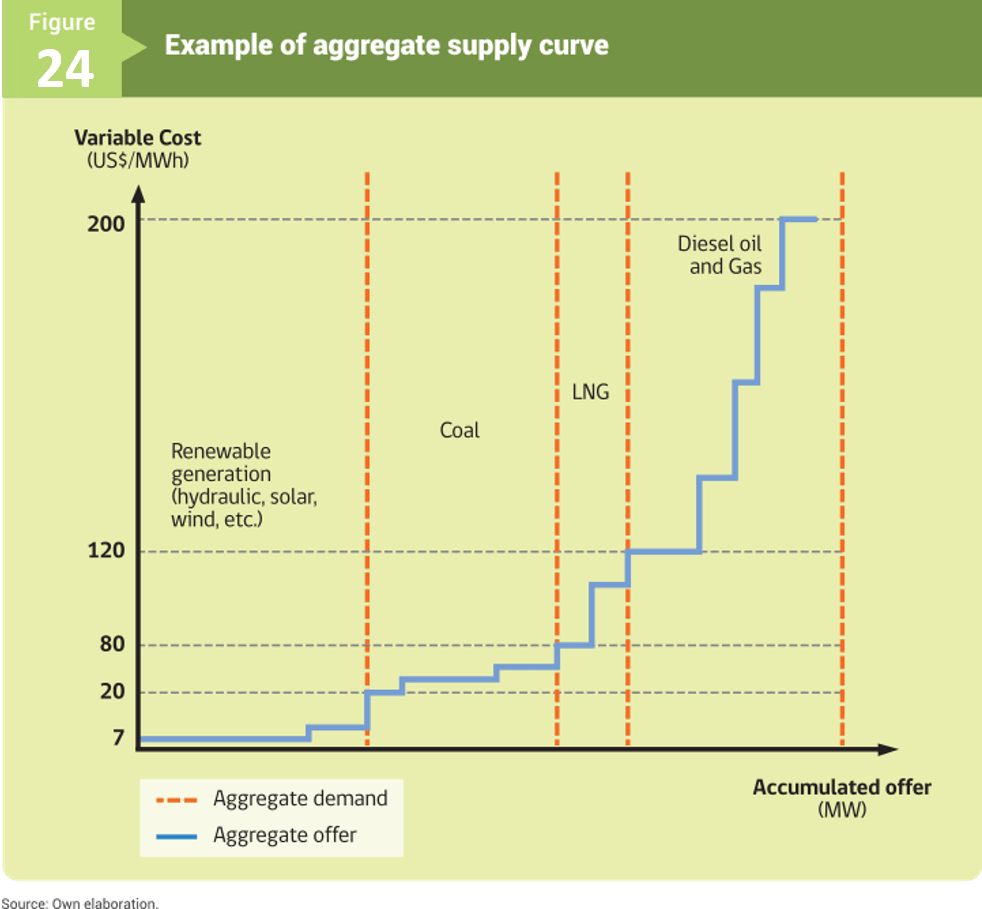 4.4.1.2 Commercial balance of an NCRE generator

For a NCRE generator that participates in energy and power transfers in the electric system, the commercial balance is composed of: its injections and withdrawals in the spot market, energy and power sales according to its supply contracts, its NCRE attribute sales (however, given that currently there is a large supply of NCRE projects that exceed the quota established by Law 20.257, the NCRE attribute has no great value in the market), its fixed and variable generation costs and other payments that may correspond charges and payment for ancillary services. It should be noted that the payment of charges is eliminated by the Law 20.936 of July 2016. For more information, refer to section 2.4.2. The following expression represents, in a simplified way, the commercial balance of a NCRE generator:

A NCRE generator may also have income from providing ancillary services. Which in accordance with the regulation (DS N°113 of 2019) will be remunerated according to the value awarded in the auction or tender. In the case, the services that must be provided and/or installed directly will be valued and remunerated according to a Cost Study conducted by the Coordinator.