4. The NCRE in the Chilean electricity market
4.1. General context
4.2. Overview of stages of project development
4.3. Definition of means of NCRE generation
4.4. Regulatory framework

The adequacy power of generators for non-conventional sources such as geothermal, wind, solar, biomass, tidal, small hydroelectric and cogeneration plants is determined based on the type of input used. According to Article 9-3 of the NT of S.D. N°62, for this purpose, the statistical information provided by each owner will be used and will be considered the worst scenario of average annual availability. The result is reduced by a factor proportional to own consumption, projected maintenance periods and forced unavailability, as detailed in Annex 3.

In summary, the recognition of the adequacy power will vary mainly according to the available resource and the point of connection, besides its capacity and the potential evolution of the same. For example, to December 2018, photovoltaic and wind power technologies are recognized with an average adequacy power of 14% and 11% of their maximum capacity, respectively, as can be seen in Table 5 and Table 6. It should be noted that some plants have been built in stages, so the growth of their capacity can change these numbers. 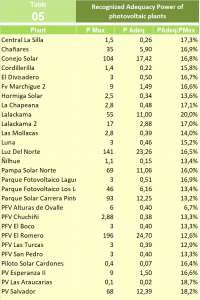 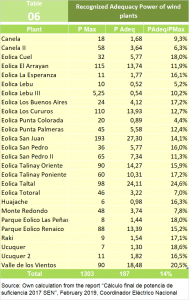