6. Commercial operation in the market
6.1. Overview of marketing alternatives

As described in section 2.4.2.2, the payment of the transmission is an aspect that was recently modified by the new Law 20.936 of 2016. The principle of this legal modification was based on the need to move from a payment system based on the allocation of costs and complex to calculate, to a simpler and transparent system of stamp to demand. Due to the great change that this means for the market and the agents, a transitional regime was established that is detailed below and that tries to make a smooth transition and harmonic, while avoiding double payments by the consumers.

6.3.1. Payment of charges for use of the National Transmission System (previously Main)

Until December 2018, the National Transmission payment regime will maintain the principles of the old system. That is, under the following criteria:

During the period between January 1, 2019 and December 31, 2034, the system of payments for the use of the National Transmission System by the generating companies will differentiate between injections and withdrawals according to the date of the associated contract.

For injections and withdrawals associated with supply contracts entered into prior to the entry into force of the Law 20.936 (July 2016), the same principles of the old system will be applied, but with some adjustments. One of the most relevant adjustments corresponds to an adjustment of the charge to pay for the injections for each year, which will cause a gradual decrease of the payment until completely eliminated in the year 2034, as indicated in Figure 33. The difference will be absorbed by the final customers through a single charge. Likewise, for the calculation of charges during this period, the installations of the national system whose date of entry into operation will not be later than December 31, 2018, nor the facilities associated to the SIC – SING interconnection will be considered. Both will be fully paid by the final customers through a single charge. The detail of other adjustments for the payment of charges of injections associated with contracts prior to transition period is found in Transitional Article twenty-fifth of Law 20.936. 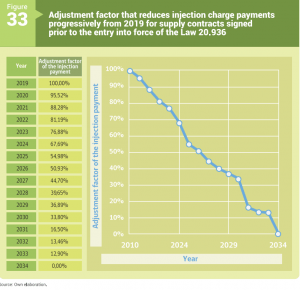 The injections associated with supply contracts after the entry into force of the Law will not be subject to the payment of charges for the use of the national transmission as of January 1, 2019.

6.3.2. Payment of charges for use of the Zonal System (previously Subtransmission)

With the amendment of the Law of 2016, the use of Zonal Transmission Systems is 100% charged to final customers and therefore generators are released from this payment [52].

6.3.3. Payment of charges for use of the Development Poles

6.3.4. Payment of charges for use of the distribution system

The payment of charges for use of the distribution system is only applicable in the event that a generator has a supply contract with a free customer located in the concession area of a distribution company. This free customer constitutes a retirement for the NCRE generator. In this case, the value of the charge will correspond to the component paid by users regulated by the use of the distribution facilities. This component is known as Value Added Distribution (VAD), and is determined every 4 years. The value of these charges is regulated in S.D. N°99/2005, which establishes the formulas to determine their amount [55].

It is important to note that distributed generation projects of up to 300 kW (Law 21.118) do not pay distribution charges.