The integration and operation of NCRE in the market is necessarily conditioned by the design of the electricity market in which they intend to operate. In order to understand the different steps involved in a NCRE generation project, it is worth considering the different stages and elements that condition their development. Thus, it is possible to identify different criteria and elements to be considered for each one of the specific objectives proposed. Figure 20 summarizes the main steps in analysing a NCRE project. This document describes the integration and operation of NCRE projects in the electricity market. 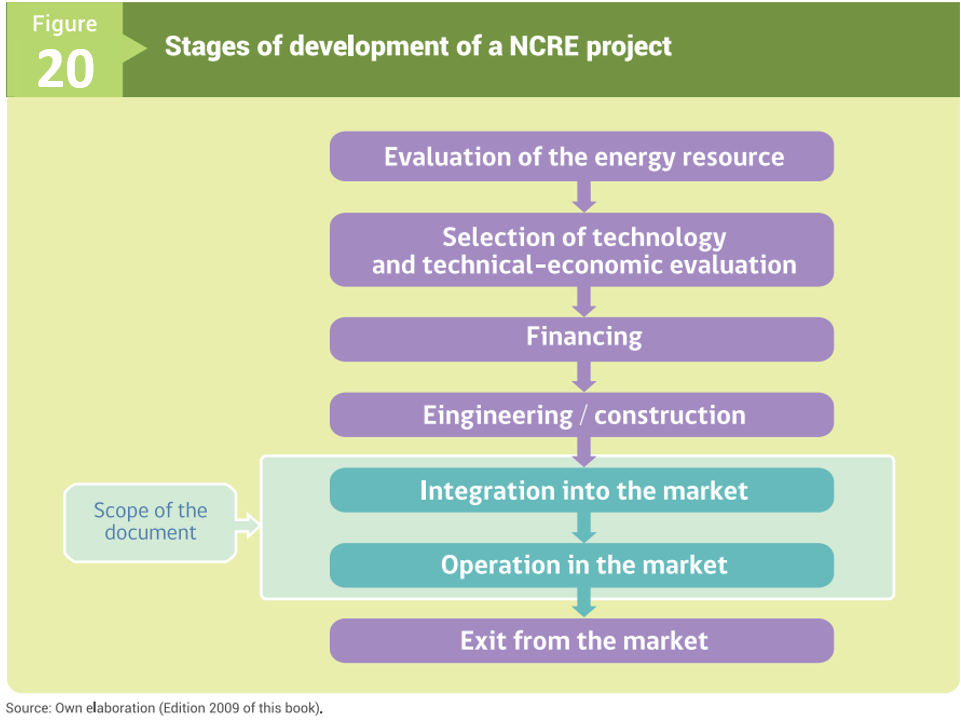 Market integration brings together various aspects of sectoral policies and the legal and regulatory framework. On one hand, it considers the technical elements required from a NCRE project to inject electricity to an interconnected electric system (certifications, environmental impact assessments, construction permits, tests, measurements and protection measures). On the other hand, integration refers to the connection costs that a project may face, that could depend on the location (for example: distribution, dedicated and zonal transmission), type of technology to be used (for example, with or without surplus regulation capacity) and power levels to be injected into the network (i.e. lower or greater than 9 MW). These factors are closely related to defined payment schemes for transmission and distribution.

Operation in the market refers to the price system a NCRE project shall face in order to estimate its revenues and costs during operation. It is necessary to know the commercial alternatives for each project, or the different feasible business models. For example, one needs to know the way in which way energy sales prices are determined, the price of capacity, the sale of ancillary services and the prices of possible contracts. This analysis also includes possible charges that may be paid individually or as a group, and other items of expenses or revenues.

As an example, in order to contrast this process for different market designs, in a system based on bilateral physical contracts, common in Europe, the self-unloading condition is a prerogative of generators that have supply contracts. However, as will be seen later, in systems such as the Chilean, the concept of self-dispatch is restricted to only some agents, since they conflict with the operation at a minimum overall cost of the system.

Finally, the market exit stage refers to the conditions that an agent from the sector must comply with to stop operating in the electricity market. In this aspect it is necessary to comply with administrative processes that ensure an adequate end to a NCRE project or its transfer to another market agent.

According to Figure 20, the scope of this document focuses on the stages of integration and operation in the market of a NCRE project. While elements to be considered in the other stages are illustrated, the detailed treatment is restricted to the two areas indicated.