The Law 20,936 of 2016 added for the first time in Chilean legislation aspects related to energy storage, including Energy Storage Systems to the list of coordinated by the SEN. The definition presented regarding storage systems is as follows:

“Technological equipment capable of withdrawing energy from the electric system, transforming it into another type of energy (chemical, potential, thermal, among others) and storing it with the objective of, by an inverse transformation, injecting it back into the electrical system, contributing to safety, sufficiency or economic efficiency of the system”.

It should be mentioned that the regulation of the coordination and operation of the national electric system is in elaboration, in which the provisions to integrate the storage systems in the programming and operation of the system are established. Specifically, it establishes the obligations of the Coordinator to operate the withdrawals and energy injections of these systems, and defines its participation in the system of arbitration of energy prices. Also, it establishes the methodology to consider these systems within the operation programming, as well as how to determine the variable costs and the recovery window of the storage system.

In general, storage systems are categorized by the type of energy they store, such as: electrochemical, mechanical, electrical and thermal. Figure 11 shows the main types of energy and storage technologies. 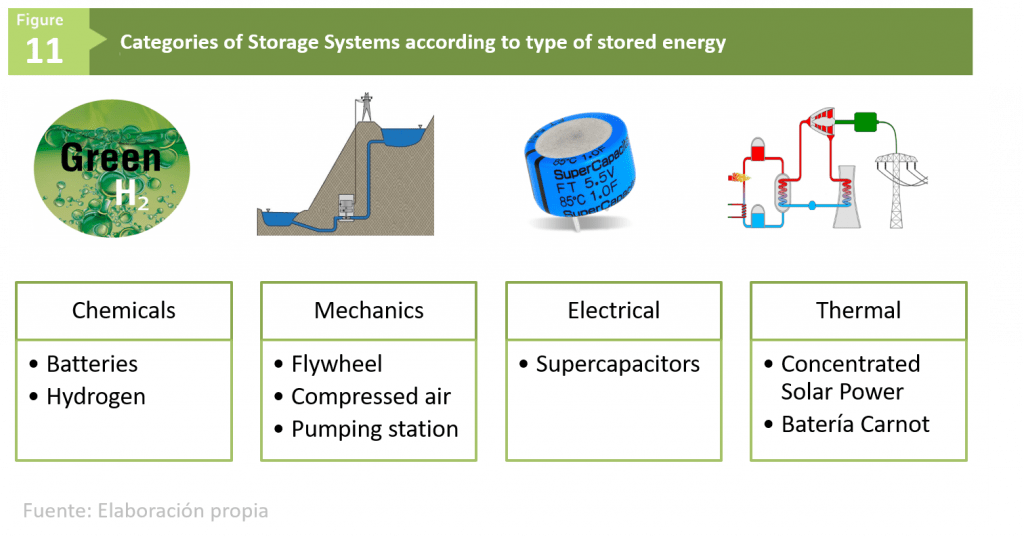 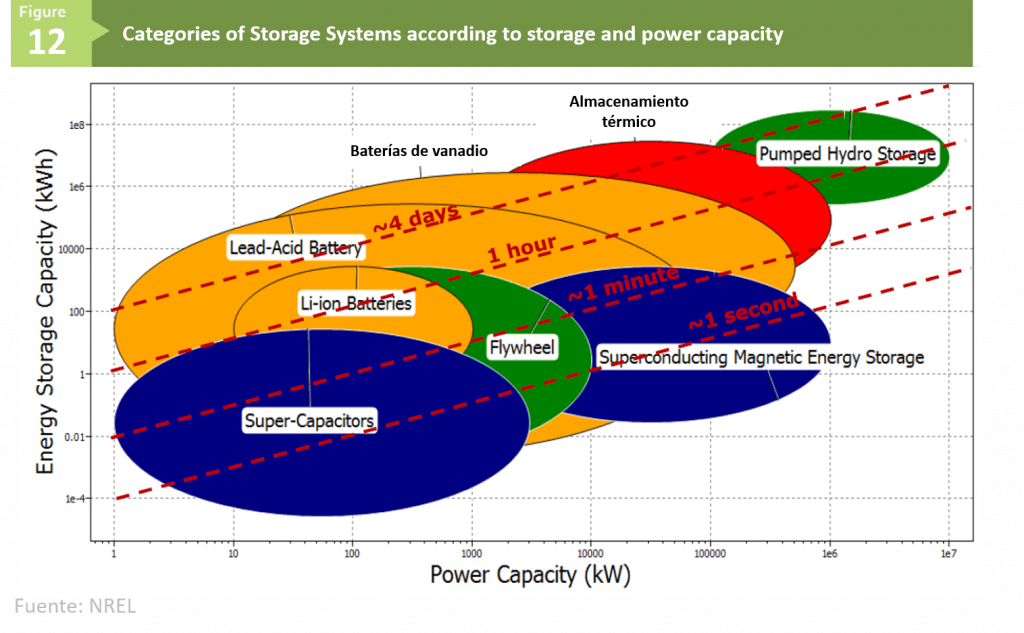 Regulation S.D. N°125 of 2019 of the Coordination and Operation of the SEN establishes the provisions to integrate storage systems and centrals with pumped storage in the programming and operation of the system. This regulation allows storage systems to be used for the provision of ancillary services, price arbitration or incorporation as infrastructure associated with transmission systems.

The two modes of operation of these systems are withdrawal and injection:

With regard to withdrawals, the Coordinator and the storage system operator must propose withdrawal programs, the Coordinator’s will be considered efficient while the other will determine the definitive withdrawal program. In actual operation, hours that do not contribute to the economic and safe operation of the system will be classified as those hours in which the respective installation has implied a higher level of hourly power withdrawal than that defined in the designated efficient program for said hour.

Law 20,936 establishes that withdrawals made in the storage process will not be subject to the charges associated with end customers, nor to the obligation to prove that at least a percentage of these come from renewable sources.

Regarding the injection mode, the Coordinator must choose one of the following methodologies:

The withdrawals and injections of energy made for price arbitration will be valued at the marginal cost of the corresponding bar, in this way the storage systems participate in the energy balance.

Regarding the ancillary services market, Law 20,936 is technologically neutral. Therefore, any facility that meets the standards required for the provision of each type of service is a possible provider. Currently there are storage systems enabled to provide primary frequency control to the SEN.

As for the contract market, storage systems are allowed to support bidding in energy tenders for regulated customers. This was for the first time allowed in the bases of the energy tender dated May 2021 (which was postponed but not carried out). The purpose of this tender is to auction 2,310 GWh to supply the energy needs of the regulated clients of the SEN starting in 2026 for 15 years.

However, with respect to the trading of energy with distributors or free clients, the storage systems may not make withdrawals of energy to trade with them.

On the other hand, D.S. N°37 of 2021 presents general guidelines to include storage systems in the planning of the transmission system. This establishes that storage systems may be incorporated that allow to increase the safe transmission capacity or supply the demand of end customers where, it is verified that a solution through conventional transmission infrastructure alternatives is not adequate, either due to economic efficiency or chance.

For the purposes of the above, only those that have the following characteristics and purposes may form part of the project portfolios of the different stages of transmission planning:

The storage systems may provide other services that are compatible with the transmission service required in the expansion plan. For this, the owner can build it with higher levels of power and energy assuming its cost. The operation that is made of the proportion not awarded must at all times, allow the provision of the transmission services required in the expansion plan. The design of the system awarded must be such that its operation does not impose restrictions on the transmission system that requires additional investments.

Regarding renewable power plants with storage capacity, the S.D. N°125 of 2019 defines how these technologies should be integrated into the coordination of the operation. The definition presented is the following:

Unlike storage systems, these plants should not make withdrawals from the system to store energy, since the storage process will be carried out exclusively with energy inputs from their own generation. Unless for security reasons the Coordinator instructs such action. Another great contrast is that they can trade energy with free customers or distributors. This action is not possible for non-self-generated storage system owners.

On the other hand, the temporary energy management capacity of renewable power plants with storage capacity is recognized in the remuneration of the capacity market. Therefore, a renewable plant can increase its recognition of contribution to the sufficiency of the system by adding a storage system to its generating plant.