6. Commercial operation in the market
6.1. Overview of marketing alternatives

6. Commercial operation in the market

The market operation of a NCRE project is regulated by the general rules applicable to any generator, described previously in chapter 3. Based on this general description, the different commercial alternatives for a NCRE project are now set out in greater detail.

The technical aspects of the operation in an electric market are covered by the regulations and technical standards of the respective segments. In the case of transmission systems, the NTSyCS defines the operation and measurement requirements of the generating units. At medium voltage levels, the NTCO of PMGD focuses on the operational and coordination aspects of PMGDs.

Figure 30 shows a schematic diagram related to the elements considered in the market operation. In the first place, the different alternatives of participation are presented, among which the three basic ones stand out: “out of the market”, spot market and contract market. There are other alternatives that are, in broad outlines, a combination of the aforementioned alternatives. As for the “off-market” alternative, this refers to the direct (and private) negotiation between a small NCRE generator and the distribution company, without being directly part of a more formal market, such as the spot market or one of contracts.

The second stage shows elements of market share, among which the payment for the use of the network (charges) and ancillary services (SSCC) stand out.

Finally, reference is made to other elements to be considered in the market operation of a project, such as NCRE generation quotas (established in Law 20.257 and Law 20.698). 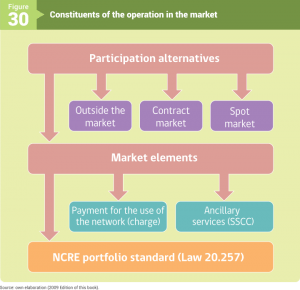