5. Integration into the NCRE market
5.1. Integration alternatives to an electric system
5.2. Processing of technical permits

5. Integration into the NCRE market

This chapter deals with the issue of integrating NCRE into the market. It is important to note that the topics covered in this section are primarily technical issues. Initially, the different integration alternatives available for participating in the market will be described. The legal provisions in force, the obligations of participating in the market, eventual preferential arrangements and their justifications will be considered. These alternatives also refer to the level of voltage in the network (distribution with voltages lower or equal to 23 kV, sub-transmission or transmission with voltages greater than 23 kV) or to development poles, to arrange the connection of a NCRE project. Once the project connection location is identified, the necessary procedures to allow for the operation of a NCRE generator are described. Finally, connection costs are discussed. These also depend on connection location, as occurs with the associated procedures and technical regulations.

Figure 26 shows the corresponding stages considered in the NCRE market integration process, these stages are described in detail in the following sections of this chapter. 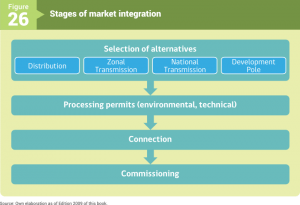