The design of the Chilean electricity market is based on the above described marginalist theory, which contemplates a scheme of marginal prices of energy (operation) and power (development) to be paid by consumers according to the principles of the Peak Load Pricing theory.

The spot wholesale market is closed to generators, but is managed by the Coordinator under an ISO structure, where generators are obliged to participate, presenting their variable cost statements based on their actual generation costs, with the possibility of being audited by the Coordinator. This aspect distinguishes the Chilean market from others based on energy bags or centralized operation with free purchase and sale offers. Figure 14 shows the interactions of the different agents in the Chilean market scheme. It should also be noted that in the Chilean electricity market there is no concept of physical bilateral contracts, still present in some electricity markets such as the European one, where supply contracts between private agents have the right to be informed to the system operator and translated in a physical dispatch. In Chile, private supply contracts only have a financial character, the Coordinator being the entity that performs the physical dispatch hour by hour, based on the information of operating costs of each of the generating units seeking the most economic operation possible without being restricted by these contracts.

The Chilean electricity market focuses on competition in the execution and development of efficient generation projects (investment and operating costs) and the good commercial management of bilateral contracts with free and regulated customers 10. This differs from what is observed at the international level, since Chile does not have a short-term supply scheme for the office, but a communication of generation costs, the definition of bid strategies for the purchase and sale of energy does not correspond to a critical element in competitive performance.

Figure 16 shows a general outline of the functioning of the national market. It shows that the generating companies are related to the spot market through purchases and sales of energy and power, at the marginal cost of energy (Cmg) and price of power respectively. This scheme is also applicable to PMG(Small Generator), PMGD (Small Distributed Generator) and other NCRE projects. However, as will be seen later, in the case of PMGs and PMGDs it is also feasible to access a stabilized price in energy sales (see S.D. N°88 of 2020).

The nodal price (PN) of capacity shown in Figure 17 is determined every six months by the authority as the cost of development of the cheapest technology to supply electricity during peak hours of demand. For each generation unit, depending on the characteristics of its primary energy source, its rate of forced failures, scheduled outages and joint contribution to the system, a capacity is recognized, which is used to determine its capacity revenues (sale of capacity). This kind of mechanism is known in international literature as “administrative type capacity payment”, because it is not determined by the market, but by an administrative body that evaluates and determines prices and quantities, being in the case of Chile, the CNE and the Coordinator, respectively. Likewise, each generation company, in accordance with its supply contracts and the behaviour of this consumption under peak load conditions is responsible for making capacity purchases in the system. Capacity purchases are transferred by generators as capacity charges to their non-regulated and regulated customers. In this case the procedure is regulated. Figure 17 summarizes capacity transfers between different market agents in the spot market. 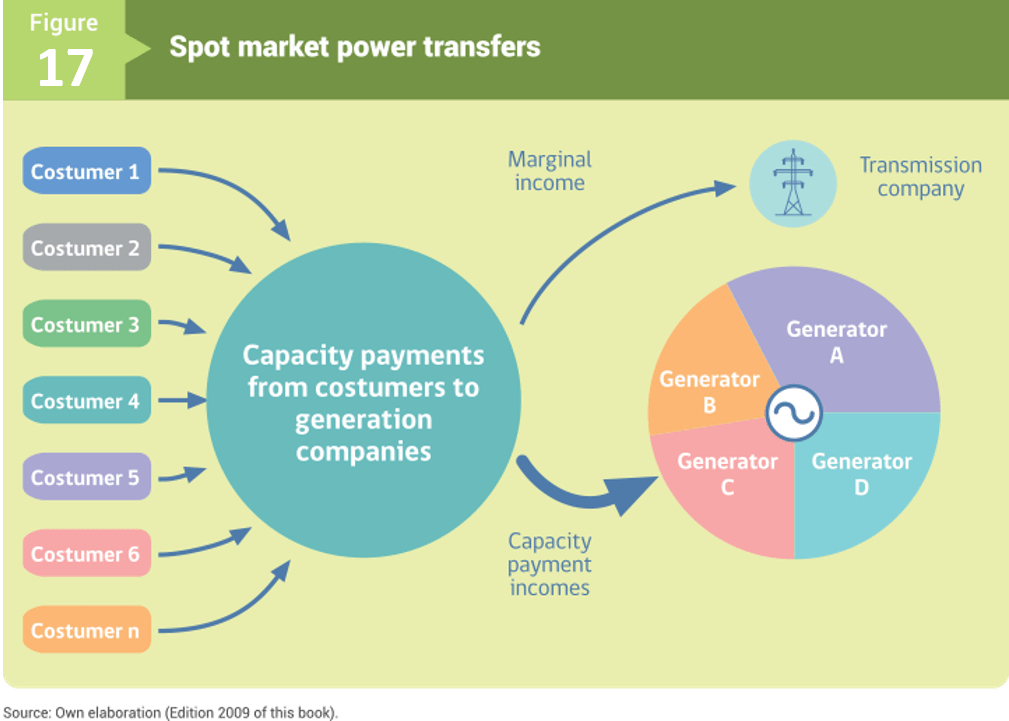 It can be seen that in theory, capacity charges to final customers cover the capacity revenues of power plants. The surplus or deficit capacity condition of a generation company will depend on its supply contracts. For instance, a company with no supply contracts will always be a surplus company in capacity transfers, since it has no declared obligations and these will not be discounted from its balance.