3.2. Model of the electricity market

The Coordinator, by means of procedures and mechanisms regulated and well known by all agents, determines the short-term market price of electricity (“clearing price” or “spot price”), which is the clearing price of the market (Spot market). This price results from the implementation of a centralized economic operation by the coordinator and can be different in each zone of the system, according to various conditions, such as losses and congestion.

The centralized economic dispatch by the Coordinator is based on the declaration of operating costs by the generating companies (costs that can be audited) and not in offers, as is done in other markets in the US, Europe, Colombia, etc. As a consequence, the economic hourly dispatch of the system is obtained, which corresponds to a merit 7 order in function of the variable cost of operation, which results in the marginal cost of operation and transfers or commercial exchanges of energy between the companies that generate more or less than their contract levels. The design of the market does not explicitly contemplate the figure of a trader, however, the Portability Law, that is the first process,  will  create this agent. Nowadays, it is the generation and distribution companies that exercise this role of interaction with customers, but not at the spot market level, but rather through contracts.

In the wholesale electricity market in Chile, the generating companies trade energy and power among themselves, which depend on the supply contracts that each one has signed, because the real demand of their customers will be assigned as withdrawal of energy from the generator.

The balance of power transfers between generators occurs in a similar way. The physical and monetary transfers (sales and purchases) are determined by the system coordinator, and are valued at the short-term node price of the power of the corresponding injection or withdrawal bar.

Figure 15 summarizes the basic interactions observed in the wholesale market in Chile. In the case of bilateral financial contracts, blue lines represent contracts that are defined by direct and free negotiation between the parties (G1 with Free Customer 1), while red lines represent contracts that are regulated, for example the case of G3 with the distribution company. It is also important to note that Figure 15 shows that the spot market is closed to generators, and that there may be some of them whose business is only sales to this market, as is the case of G2. The sale of generators in the spot market is represented by the green arrows. 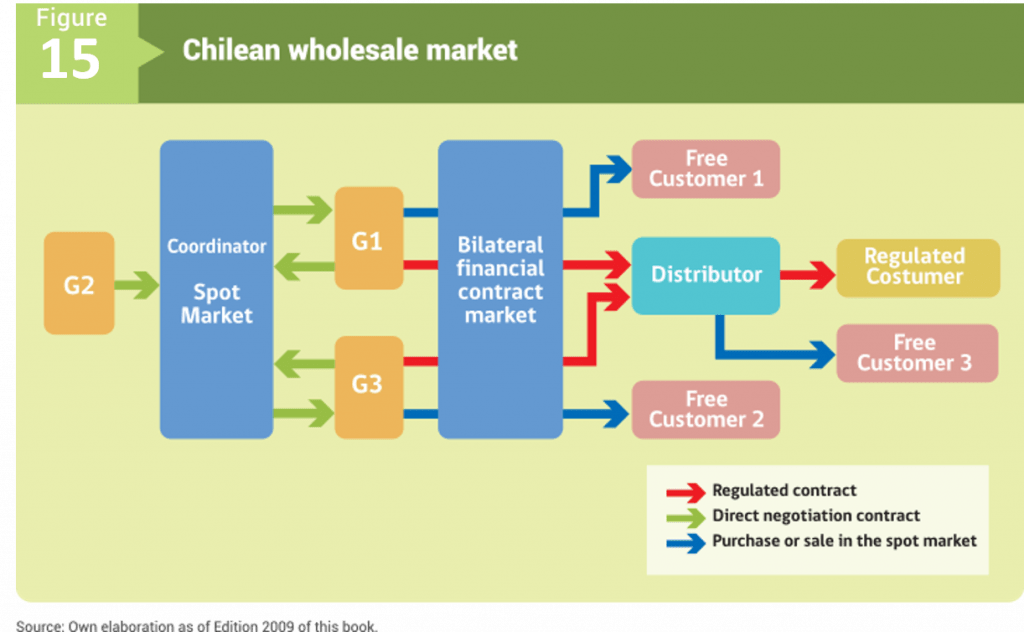 It should be noted that supply contracts that can establish a distribution company with free customers are not part of the spot market or the concept of wholesale market described above. In the case of Figure 15, the contract between the distribution company and the Free Customer 3 does not directly participate in the wholesale market and is only part of the energy and power transfers through the supply contract between the distributor company and the generators G1 and G3.